Want to open up for Bon Jovi during his 2017 tour? Now just might be your chance.

The legendary New Jersey-based rock group has launched a contest, looking for opening acts to perform in all the cities during their 2017 tour. All you have to do is submit an "audition video" to Bon Jovi's Facebook page.

Here’s your chance to open for us in a city near you! Enter our Opening Act Contest! https://t.co/sXpxCZ6wsa pic.twitter.com/mt0TgFHPc8

Officials from concert promotion company LiveNation will select the finalists, and Bon Jovi management will then pick winners from the finalists to perform 20-minute sets.

With the announcement, Bon Jovi stated their mission behind the contest was to pay tribute to the talented aspiring musicians out there - regardless of stature.

"Every great band starts small and builds their rep one show at a time," Jon Bon Jovi said Tuesday in a statement on the band's website announcing the contest. "That's the opportunity we were given, and now we want to pay it forward. If you're ready for the arena stage, submit your audition tapes and join us in playing for the best audiences in rock music."

Bon Jovi brings their “This House Is Not For Sale" tour to Golden 1 Center on Feb. 28. Who takes the stage with them? We'll soon find out! 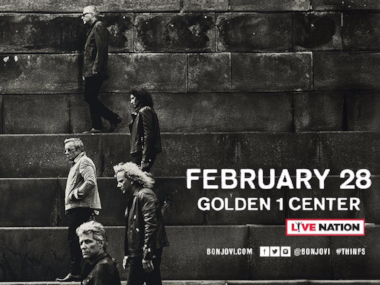 Feb 28 \ This House Is Not for Sale Tour
Tickets