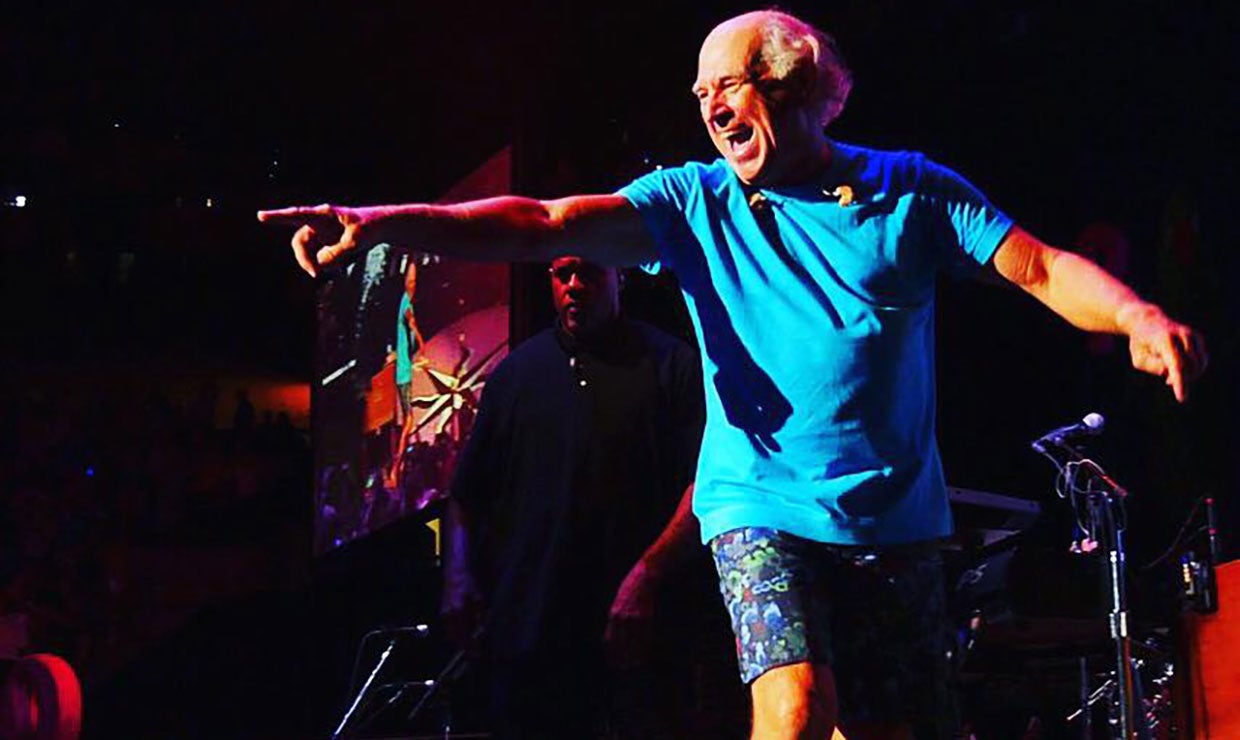 Buffett and The Coral Reefer Band have taken Margaritaville on the road again in their ‘I Don’t Know Tour’ and here’s what’s got people talking.

“Outside of a stadium, amphitheatre or an arena (at the absolute smallest), it’s next to impossible to catch Jimmy Buffett & The Coral Reefer Band in concert. Yet Parrotheads throughout Chicago (and those who made the pilgrimage from around the country) were treated to an unbelievably intimate show at the House Of Blues as a semi-surprise precursor to the “I Don’t Know” Tour.

Even if the “Margaritaville” man isn’t held with the same esteem as fellow 1970s start-ups James Taylor and Jackson Browne, he’s actually quite an articulate and gifted storyteller who’s hands down the top troubadour when it comes to “Boats, Beaches, Bars & Ballads.” Each category popped up in ample quantity at the House Of Blues with “Pencil Thin Mustache,” “Peanut Butter Conspiracy,” “Cowboy In The Jungle,” “I Don’t Know” (from “Fast Times at Ridgemont High”) and “Gypsies In The Palace” (co-written with his former neighbor and “Hotel California” tourmate Glenn Frey) getting some much deserved airtime.”

“You either get Jimmy Buffett or you don’t, there really is no middle ground. The sights and sounds at a Jimmy Buffett concert are a sight to behold. The so called Parrotheads, are always out in full force. The outfits are so bizzare and entertaining that you have no choice but to surrender to the good time vibe that is all encompassing.

His energy and enthusiasm in playing songs for the thousandth time is infectious. His anecdotes and banter with the band is genuine and entertaining. The atmosphere he creates makes you understand why so many people flock to see and become part of the Buffett lifestyle. The tropical and nautical backgrounds emerse you in to Jimmy’s world.”

“Forty-plus years into a career and none of it changes. And that’s exactly how Parrotheads like it.

Jimmy Buffett skipped onto the stage in his traditional uniform of pastel shorts and flip-flops and immediately burst into Summertime Blues with his nine-piece band and two backup singers. By the second song, a steel drum-infected cover of Van Morrison’s Brown Eyed Girl, the shoes were chucked and the nearly sold-out crowd popped to their feet to sing along.

The fact is, Buffett could be up there reciting the Gettysburg Address and as long as fans could wear a foam fin on their heads, they’d be happy to recite along with him.”

“The energy in the arena was electric as Buffett, barefoot and bedecked in a bright yellow t-shirt and blur shorts, took the stage, opening with the popular, Piece of Work, bringing the crowd to its feet for the first of many times in the evening.

An entertainer for the masses, the Yum! Center was filled to capacity with an audience that spanned generations from great-grandparents singing the lyrics to 8-year-olds dancing in the aisles… 17,000 fans were singing and swimming in solidarity as the island legend jammed with the band.”