The Thrill Of It All, Sam Smith's New Album, Out November 3 On Capitol Records
Smith Performs On "Saturday Night Live" October 7

Sacramento, Calif. – Today Sam Smith announced the North American dates for The Thrill Of It All tour. The arena run will kick off on June 18, 2018 at Air Canada Centre and will make its way to Sacramento on Friday, August 24 at Golden 1 Center.

Sam Smith's sophomore album, The Thrill Of It All, will be released worldwide on November 3 via Capitol Records. The pre-order is underway now at http://samsmith.world/TTOIAUS. Fans who pre-order the digital album will instantly receive the new track "Pray" plus the first single, "Too Good At Goodbyes."

Smith will be the musical guest on "Saturday Night Live" on October 7. He recently gave fans a taste of his new album during a series of intimate shows in London, New York, Los Angeles and Berlin. The Thrill Of It All finds Smith once again working alongside close friend and long-time collaborator Jimmy Napes plus Timbaland, Malay, Jason "Poo Bear" Boyd and Stargate. He also collaborates with the unsigned artist YEBBA on the song "No Peace."

"Too Good At Goodbyes," the album's first single, is a global smash, hitting No. 1 on the U.K. and Global Spotify Charts and topping the U.K. and U.S. iTunes charts. It has captured the top spot on the U.K.'s Official Singles Chart Top 100 for three consecutive weeks, marking Smith's sixth No. 1 single there. In the U.S., "Too Good At Goodbyes," debuted at No. 1 on Billboard's Digital Song Sales chart. Worldwide Spotify streams of the single already exceed 100 million.

Rolling Stone hailed "Too Good At Goodbyes" as "poignant" and TIME observed, "Cue the swelling violins, gospel chorus and Smith's inevitable return to dominance." Vulture said, "Crooning with his trademark soul, Smith packs an emotional punch with his lyrics...It's been a long wait...but if the rest of his upcoming album is as moving as this new song, it has certainly been worth it."

Released in June 2014, Smith's In The Lonely Hour was the biggest selling U.K. male debut in the SoundScan era and went on to sell 13 million adjusted albums worldwide. In February 2015, Smith set a GRAMMY® record, winning a total of four awards - the most ever received by a U.K. artist following the release of a debut album. He was named Best New Artist, In The Lonely Hour took Best Pop Vocal Album honors and his single "Stay With Me" won awards for both Record and Song of the Year. Smith has also earned an Oscar, a Golden Globe, three Billboard Music Awards and three BRIT Awards, among others. 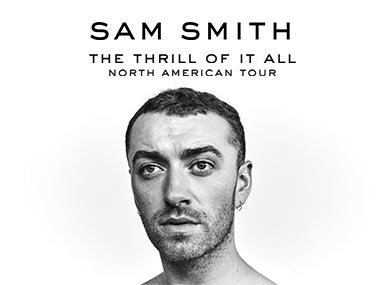 Aug 24 \ Thrill Of It All Tour
Tickets