Sacramento State vs. UC Davis Tickets Are On Sale Now

The Local Rivalry Match-Up Returns to Golden 1 Center on November 21, 2017

Sacramento, Calif. – College basketball returns to Golden 1 Center on November 21 when Sacramento State takes on UC Davis. Fans will have their first chance to snag tickets for this long-standing local rivalry beginning today. As the premier universities in the Greater Sacramento Region, these two teams have a tradition of high-level athletic programs and memorable competition.

Following last year’s match-up at Golden 1 Center, this will be the second time the two schools face-off on a neutral court within the last two decades – previously meeting during the Capitol City Classic at Arco Arena in 1989.

Presale has begun and will run through October 26 at 10 p.m. – a discounted General Admission Ticket will be available during presale only. General on sale will begin Friday, October 27 at 10 a.m. For tickets and more information visit Golden1Center.com.

Home team UC Davis, who ended last year’s match-up with a win, has been recently regarded as a program on the rise. On the heels of its first postseason run at the NCAA Tournament, the defending Big West Conference Champions look forward to a new season.

“We are thrilled to showcase UC Davis basketball inside a world-class facility in another exciting Causeway Classic game,” says Aggies head coach and former Sacramento Kings team member Jim Les, “This program would like to thank the Sacramento Kings for allowing the Aggies to play inside their state-of-the-art home, and hopes all the great basketball fans throughout the Sacramento region enjoy this rivalry matchup against the Hornets.”

Sacramento State, a member of the Big Sky Conference, holds a 66-49 all-time record against their local rival the Aggies. Coming off the 2016-17 season, the team went 13-18 overall and 9-9 in league.

Brian Katz, who’s heading into his 10th year as head men’s basketball coach, is excited to carry on the tradition of playing at Golden 1 Center this season. “Playing at Golden 1 Center was a great experience last year,” says Katz, “It’s an excellent way to showcase college basketball between the two Division I institutions in the Sacramento area. We hope fans come out to support this rivalry with the same enthusiasm as they did last year.” 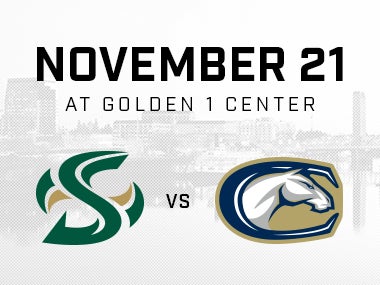