Golden 1 Center will continue hosting premier college basketball teams throughout the season beginning with this new November tradition, as well as hosting the first and second round of the 2017 NCAA Men’s Basketball Championship.

“We’re honored to host student-athletes and fans from four outstanding universities and athletic programs,” said Golden 1 Center General Manager Juan Rodriguez. “Sacramento will be a home to showcase premier college basketball in a world-class venue for years to come.”

Ticket information will be released by Golden 1 Center and each school before early September.

As the premier universities in the Greater Sacramento Region, these two teams have a long standing history of high-level athletic programs and memorable competition. The November 21 game will be the first of four annual games featuring these two teams at Golden 1 Center.

Both teams feature players and coaches with local ties including UC Davis’ Coach Jim Les, a Sacramento Kings alum who led the NBA in three-point field goal percentage during his tenure with the team, seniors Darius Graham and J.T. Adenrele who attended Sacramento and Oakmont High School, respectively, before arriving at UC Davis.

Sacramento State
A member of the Big Sky Conference, Sacramento State finished last season with a 14-17 overall record, which included a series split with UC Davis that saw each team win on the home floor. The Hornets welcome back 10 players, including four starters and four of the team’s top five scorers from a year ago. Among those starters are junior forward Justin Strings (15.5 ppg) and junior guard Marcus Graves (12.2 ppg) who combined to average nearly 28 points a year ago. Sacramento State and UC Davis will be playing for the 115th time in the long-standing rivalry with the Hornets owning a 66-48 all-time record over the Aggies.

“We are very excited to compete in the first ever collegiate basketball game at the Golden 1 Center,” Sacramento State head coach Brian Katz said. “It should be a great atmosphere, and we are looking forward to playing this rivalry game four consecutive years inside the new facility."

UC Davis
Led by its five-member senior class, an athletic and experienced roster is eager to help UC Davis in its quest to capture its second Big West Conference title in the last three seasons after claiming the crown in 2015. Last year, the Aggies were responsible for the league’s top-ranked defense; two-thirds of that team’s offense returns for sixth-year head coach Les.

“The Sacramento region is home to some of the best basketball fans in the nation,” said UC Davis Coach Les. “Golden 1 Center will only enhance that reputation and UC Davis is excited to be a part of the first college basketball game in the new arena. Our alums, fans, players, and coaches are all excited for this opportunity and appreciate the Kings organization for inviting us into their new home.”

This top-tier matchup brings together two of the most exciting teams from the 2015-16 season. Both teams are looking for an early-season win at a neutral site and begin planning a possible return trip to Sacramento for the First and Second round of the NCAA Men’s Championship Tournament at Golden 1 Center. San Diego State will bring four Sacramento natives back to their hometown. D’Erryl Williams, Dakarai Allen and Malik Pope scored 522 points for the Aztecs last season.

Cal
The Golden Bears reached the NCAA Tournament in 2016, earning its highest seed in program history after posting a perfect 18-0 record at home. While they lost Jaylen Brown and Tyrone Wallace to pro careers, the Bears return a veteran core of players that includes senior Jabari Bird and sophomore Ivan Rabb, who's being heralded as a national player of the year candidate by early reports. Rabb averaged 12.5 points and 8.6 rebounds in his debut season. Cal led the Pac-12 in defense, holding opponents to just 67.3 points per game.

“It's an honor to be one of the first programs to help usher in a new season of basketball in one of the most advanced arenas in the country,” said California Head Coach Cuonzo Martin. “We're excited for the experience it will offer our student-athletes and our fans while showcasing some of the best players in all of college basketball.”

San Diego State
San Diego State is set to return three starters off a 2015-16 team that won the program’s third straight Mountain West regular-season title, advanced to the postseason for the 11th consecutive year and finished with a 28-10 record. The Aztecs, who have averaged 26 wins over the last 11 campaigns, are led by its starting backcourt of junior Trey Kell (12.6 ppg, 3.7 rpg), a 2015 all-MW first-teamer, and sophomore Jeremy Hemsley (12.0 ppg, 2.4 rpg), the 2015 MW Freshman of the Year. SDSU’s third returning starter is sophomore forward Zylan Cheatham (7.9 ppg, 5.4 rpg) and he is joined by a pair of players who started a significant amount games last year in senior guard Dakarai Allen (6.4 ppg, 2.7 rpg) and junior forward Malik Pope (7.3 ppg, 5.0 rpg).

“We are excited and honored to be a part of the opening of Golden 1 Center and to be playing a California team that we have had some great games with over the years,” said SDSU Associate Head Coach/Head Coaching in Waiting Brian Dutcher. “We have always had great support from San Diego State fans in Northern California and look forward to playing in front of a good crowd.” 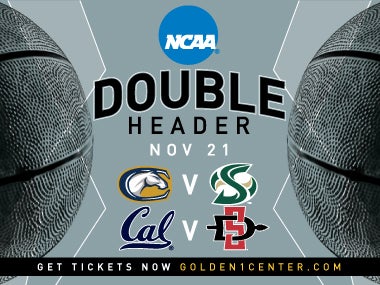