Two of the hottest bands in hard rock music are hitting the Golden 1 Center stage with their co-headlining tour on November 13th. Before Breaking Benjamin and Five Finger Death Punch bring the house down in Sactown, check out what some are saying about their chart-topping new albums and the excitement you can expect from the show:

“One of their most mature works yet, Ember carries itself with a sophistication and a profound sense of responsibility. An expressive, subdued prose about the tribulations associated with what it means to be human.”

“With songs like The Diary of Jane, Torn in Two and Angels Fall, Breaking Benjamin made their lasting impression on the audience. They were amazing and so solid with great sounding vocals, some sick guitar solo work and amazing expressions…we were seriously rocked by BB…”

“The night stayed crowded up until the last note was played from the stage. Quite the impressive feat. Breaking Benjamin continue to destroy barriers and stay on top.”

“’And Justice for None’ is a roving journey through the world of Five Finger Death Punch, narrated by an imposable force known as Ivan Moody. Moody successfully shows his vocal ranges, albeit rather focused, while allowing the many talents of his band mates to shine through.”

“[Five Finger Death Punch] is a legitimate powerhouse in the industry…if you get a chance to see this tour, do it. This is certainly one of the hottest tours of the year.”

“When Five Finger Death Punch arrived, they nailed their visually stunning show and made sure that the high energy of the night did not fade, even a little.”

Get ready to break out your rock n’ roll fingers and hold them high all night. Don’t miss Breaking Benjamin and Five Finger Death Punch live at Golden 1 Center at 6pm on November 13th! 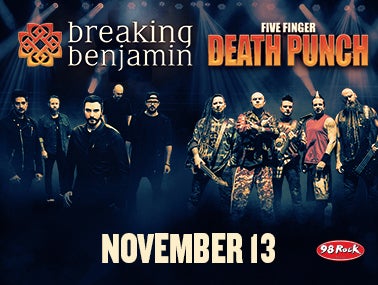