True fans of rock have undoubtedly been following along with Avenged Sevenfold (A7X) and the surprise release of their newest album, The Stage – which debuted at No. 4 on the Billboard 200 – and No. 1 on the Top Rock Albums, Top Hard Rock Albums and Top Alternative Albums charts.

In an interview with Billboard, the band’s frontman M. Shadows discusses the idea behind their new music video for “God Damn,” the latest single from The Stage.

“There's a bunch of ideas that were thrown into the mixing bowl there," Shadows, who personally greeted all the fans in attendance for the video shoot, tells Billboard, "but the main idea was to get fans involved and make sure the kids knew this is a song full of energy first and foremost – 'hey, this is a record we can wrap our heads around. It's cool live stuff. It's a rockin' song.’”

Shadows then goes on to explain the band’s “appetite for trying things outside the proverbial box,” saying, “I think we had some fun and we took a chance on it and I don't know how it's going to play out to this day. But I'd do it again."

You can look forward to hearing A7X play songs like “God Damn” and others from The Stage during their upcoming summer tour, however Shadows promises fans can count on hearing plenty of older fan favorites.

"We were throwing around ideas of 'Let's do a crazy set list where there's some deeper stuff and get more of the new record in there,' but then we said, 'Y'know what, there's gonna be 60,000 people a night and most of these people really don't have our records and maybe have heard some stuff on the radio, so we'd be shooting ourselves in the foot if we went out there and did something too crazy," Shadows says.

"So we're gonna do the bigger songs and make the set list flow constantly with things people have heard on the radio, and then we'll come back through in 2018 and do a headlining set and do some of the deeper stuff and get back to what the stage is all about." 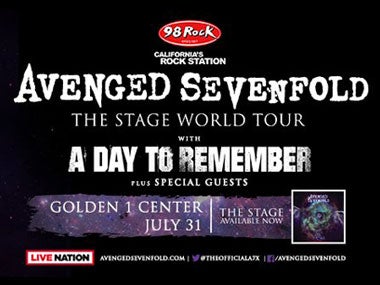