Golden 1 Center had the opportunity to hop on a call with WWE Superstar Drew McIntyre to discuss his career in the WWE so far, what he’s excited for when he arrives in Sacramento on July 9, and more.

*Responses have been edited for clarity.

You’ve had a very storied career, both in and out of the WWE. With over a decade of experience, how have you seen the evolution of the squared circle in your eyes?

I’ve been around for 15 years now. When I first arrived, I couldn’t believe the size and magnitude of the [WWE] I thought that there was no way it could get bigger. But I’ve been amazed to watch over the years to see how the company innovates. adapts, and evolves with everything going on in the world.

I remember the talk of the WWE network and thinking “that would never be a thing,” and watching how far it’s come from the network form to gigantic Peacock streaming deals, becoming the ultimate content creating monster that [the WWE] is today.

From the show perspective, it's interesting to see the styles change from an athletic based to a more hybrid style, much like myself with a different range of athletes.

The Biggest change of all is the evolution and revolution of the female wrestlers, the opportunities they have been given. These days, you don’t want to be after a female match because of how good they perform in the ring and it's a difficult act to follow.

Were there any superstars that have taken you under your wing?

When I started as a young kid, The Undertaker was put in charge of me and I listened to everything he had to say. A lot of the time the things he said went over my head because he was in such a different wrestling IQ than me. Every so often I would catch something [he said] and it would fly over my head. Years would pass and I would finally realize what he was trying to tell me, like a lightbulb moment.

What has been the most iconic match in your career so far?

Winning the WWE Championship against Brock Lesnar in the main event of Wrestlemania 36, even though nobody was there. Even though it’s not how we imagined Wrestlemania, like how it was this past year with 80,000 people screaming, that was a period where everybody was stuck indoors and scared and not sure about what was going on in the world. The WWE gave the world an escape [during that time].

I had my story told in its entirety for the first time, through all the ups and downs that I had to face, and I could give everyone a reason to smile during such a scary time. I won the title, and I had my moment in the end and even though I didn’t hear everyone screaming in the building, I heard the feedback. Even though it wasn’t the thrill I had imagined as a kid, it was still very special to me.

Your mentor, The Undertaker, was inducted into the Hall of Fame earlier this year. Growing up, was there a superstar that you looked up to?

Bret “The Hitman” Hart was my guy. All my friends were obsessed with Hulk Hogan and The Ultimate Warrior and the other larger-than-life specimens. At the time, I was always drawn to Bret. During that period, those who held the Intercontinental Championship eventually became World Champion.

As I got older, I was able to articulate how good Brett actually was through his matches. He had such compelling matches, such amazing stories that he told in the ring when everybody was doing very slow, plodding matches – which was the trend in wrestling at the time. When Bret’s match was on, I plopped myself in front of the TV, that’s how good he was at his job.

It’s awesome to see the parallel between your two careers, since the Intercontinental Championship was one of your first Championships.

We did a tour in Germany when I was 24 and Bret was on it and we got a picture together with the Intercontinental Championship. In a place where Bret was so popular - like Hasselhoff popular - It was like a dream come true.

What can we expect from you on July 9th in Sacramento and is there anything special that you’ve heard about Sacramento fans?

I’ve been to Sacramento a bunch of times and I love it. I love the West Coast. The fans out there are awesome – they’re chill but at the same time they’re passionate about what we do. It’s a place I can go out and about and go to the gym or the diner. People come up to me and start talking about wrestling here. But it's not just “Hey you’re that wrestling guy,” but more about my career and telling me about their fandom. It’s such a good place to be. It’s very much a wrestling place in Sacramento, I can’t wait to come back.

My favorite thing of all coming back to Sacramento is going out and getting myself an In-N-Out burger. That’s my routine when we get to the west coast.

For everyone watching in Sacramento, I’ll be taking some faces off. It’s also not a television taping so we’re not playing to the cameras, we’re playing very much to the crowd! It’s very interactive and it’ll be exciting for the whole family. 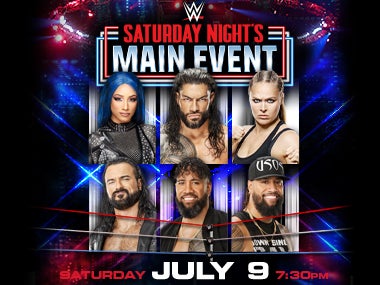