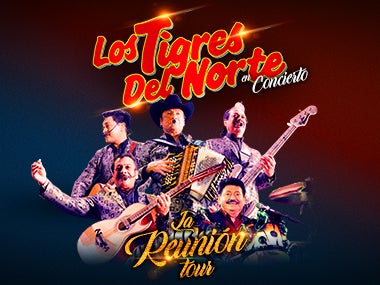 Los Tigres del Norte have reigned supreme as the kings of norteño for half a century. From cumbias to corridos, their songs are the soundtrack of the Mexican-American experience. They explore life, love and the struggle to survive—combining incredible musicianship with an outspoken social conscience. During their four-decade career, Los Tigres del Norte has recorded over 500 songs and sold over 37 million albums worldwide, notching 22 No. 1 albums and more than 50 No. 1 singles along the way. The group has won six GRAMMY Awards and six Latin GRAMMY Awards, as well as the Latin Recording Academy’s Lifetime Achievement Award. In 2011, Los Tigres became the first norteño group to star in the popular MTV Unplugged series of performances.

The legendary norteño band, who kicked off a tour in September, are set to continue with 40 more confirmed dates including a stop at Golden 1 Center on Saturday, February 12. Tickets for La Reunión Tour will go on-sale on Friday, December 31 at 11 am PT at Golden1Center.com.

Los Tigres del Norte, born in Rosa Morada, Mocorito in the state of Sinaloa in Mexico, ICONS in the world of entertainment; group made up of the Hernández family, 4 brothers and a cousin; led by Jorge on the Accordion, first vocalist and in turn Musical Director of the group, Hernán on electric bass and voice, Eduardo on accordion, sax, sixth bass and voice, Luis on sixth bass and voice, as well as his cousin Oscar in Battery.