Brace yourself for a new species of live entertainment 65 million years in the making! Jurassic World Live Tour, an exhilarating and unpredictable live, family entertainment experience that will bring the wonder and thrills of Jurassic World to generations of fans, will be debuting in Sacramento this summer playing at Golden 1 Center from June 25–28.

Sign up today to become a Jurassic World Live Tour Preferred Guest at JurassicWorldLiveTour.com to get exclusive access to advance pre-sale code to purchase tickets early starting tomorrow Tuesday, January 28 to get the best seats available. Tickets go on-sale to the general public on February 4 at Golden1Center.com and at Golden 1 Center’s Box Office.

With unrivaled arena production quality, Jurassic World comes to life with dinosaurs from the iconic franchise, including fan-favorite Velociraptor Blue and a Tyrannosaurus Rex more than 40 feet in length, taking center stage off the big screen onto the arena floor.  The production features more than 20 film-accurate, life-sized dinosaurs, each custom built with the latest technology, scientific precision and Hollywood studio quality.  With scale, speed and ferocity, the animatronic and performer-operated dinosaurs deliver colossal, edge-of-your-seat excitement that brings the Jurassic World park right to your hometown.

Jurassic World’s unmistakable musical score combined with projection and practical scenery transforms the arena into the dense jungles of Isla Nublar, where real Gyrospheres roll through the valley…but then your trip to Isla Nublar takes a terrifying turn after the Indominus Rex escapes and causes chaos in the park!  The adventure continues as you join forces with a team of scientists to unravel a corrupt plan and save an all-new dinosaur named Jeanie from a terrible fate.

With pulse-pounding stunts and an original, authentic storyline that takes place between the Jurassic World and Jurassic World Fallen Kingdom movies, this all-new live adventure is guaranteed to to take fans on a larger-than-life immersive journey and make family memories that will last another 65 million years.

With pulse-pounding stunts and an original, authentic storyline that takes place between the Jurassic World and Jurassic World Fallen Kingdom movies, this all-new live adventure is guaranteed to to take fans on a larger-than-life immersive journey and make family memories that will last another 65 million years.

“Working with a world-class production team and Universal filmmakers, we have extended the Jurassic World canon with a new story that can only be told through this live, arena spectacular as we bring full-scale dinosaurs to generations of fans around the globe,” said Juliette Feld Grossman, Chief Operating Officer of Feld Entertainment. “We have maximized the power of everything we do at Feld Entertainment, pushing the boundaries of technology and innovation to ensure audiences have an authentic, awe-inspiring experience. Fans will leave with a sense of wonder, as if they’ve boarded the boat to Isla Nublar and literally stepped into Jurassic World.”

USA Today praised the show saying “my heart still races when the velociraptor’s nose is pointed my way. It's a testament to how well the ‘Jurassic’ movies have instilled an illogical fear of extinct creatures, how true the Jurassic World Live team stayed to the animals from the movie, and how high-tech animatronic puppets have gotten in order to tell stories about prehistoric creatures.”  The New York Times describes the Feld Entertainment production as "the most technically complex the company has ever produced.” 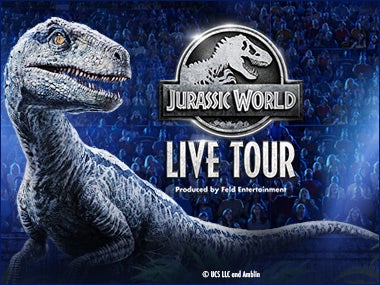