After a tremendously successful 2021 World Tour, Latin GRAMMY® award winning and GRAMMY® nominated Puerto Rican singer-songwriter Rauw Alejandro has announced the details of his SATURNO WORLD TOUR 2023 coming to Golden 1 Center on April 25. The Saturno World Tour will take the Reggaeton superstar and special guest Jabbawockeez to Puerto Rico, the United States, Canada and Mexico. With his hometown Puerto Rico shows already sold out, Rauw today announced the tour dates, venues and cities for his North American tour, including stops in the U.S., Canada, and Mexico.

The artist has been leading the new generation of Latin music artists since he appeared on the scene in 2017. Many of his hits have attained Gold, Platinum and Multi-Platinum certifications.

His latest album “Saturno” was released in November 2022 to great reviews. The album was written and co-produced by Rauw and features the already successful singles “Punto 40” Feat. Baby Rasta, “Lokera,” and “Dime Quien”. For Saturno, Rauw Alejandro wanted to elevate the affair by crafting a true album experience–one that’s meant to be enjoyed from beginning to end.

“I wanted to take my fans on a ride through my mind, my emotions–the sounds that influenced me,” says the 29-year-old singer. “This album tells a story from beginning to end. It’s a story of loss, denial – and finally, acceptance.”

Alejandro’s first album “Afrodisiaco” was released in November 2020, which was critically acclaimed and obtained Gold certification in the United States and Colombia. Additionally, Afrodisíaco was nominated at 64th Annual GRAMMY Awards® in the category of “Best Urban Music Album.” In November 2021, after receiving two nominations, Rauw won the Latin GRAMMY® for "Best Fusion / Urban Performance" for "Tattoo Remix" with Camilo.

In May of 2021, Rauw dropped “Todo De Ti,” his biggest hit to date. The mega-hit boasts more than two billion streams worldwide. The track reached #2 on Spotify’s Global chart for over three weeks and peaked at #36 on Billboard’s HOT 100. It also broke records in Spain with 1.68 million streams in a single day, reaching the top of the charts in Spain, Mexico, Colombia, Chile, Peru, Costa Rica, El Salvador, Guatemala, Panama, Nicaragua, Honduras and the Dominican Republic.

His first sold-out tour began in July 2021 in the USA, with stops in Spain and his hometown of Puerto Rico, which featured four sold-out shows. Rauw kicked off his “Rauw Alejandro Worldwide Tour 2022” with a sold-out show in Argentina, Chie, Colombia and Mexico as well as the US.

ABOUT OUTBACK PRESENTS
Outback Presents is the leading independent, full-service promoter of live entertainment. Based in Nashville, Outback Presents produces thousands of music and comedy shows, tours, and festivals annually across North America, connecting its diverse roster of artists with their fans. 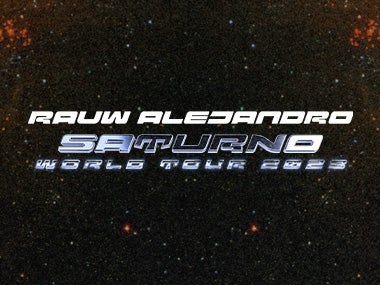