The Chainsmokers released their debut album “Memories…Do Not Open” on Friday, April 7! Here are the five best bangers to add to your party playlist.

While this song starts with a little angst, the buildup leads to the kind of drop we love from The Chainsmokers. You can’t help but want to “stay a little longer” and dance to this song.

Pairing whispery, sexy vocals and upbeat synth-sounds, this song is one of the “bassiest” of the album.

You’ve probably heard this chart-topper by now, but for good reason. “Paris” offers catchy lyrics, impressive vocals from Drew Taggart and Emily Warren, and all the basic elements for a hit.

Who knew a collaboration with The Chainsmokers and Coldplay would be a match made in heaven? The drop is reminiscent of The Chainsmokers’ big breakout “Roses” and solidifies their trademark sound.

5. Break Up Every Night

You can anticipate this song being the next track you hear played over and over on the radio – because it’s just that catchy. Who doesn’t love a good breakup anthem?

See the dynamic production duo at Golden 1 Center on May 4! 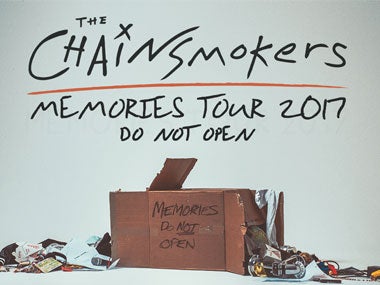 May 4 \ ‘Memories: Do Not Open’ Tour
Tickets