With the release of his hit single “Shape of You”, Ed Sheeran gave us a fierce reminder of why we’ve always loved his English charm. The chart-topping hit held us over until the subsequent release of his latest album, “Divide”.

Whether a heartfelt ballad like “Thinking Out Loud” or an honest track to soothe one’s heartbreak like “Don’t”, Sheeran has always been a go-to when you need a love song at a moment’s notice.

“Divide”, however, doesn’t fit into any one category. Courtesy of Spotify, it’s the following: 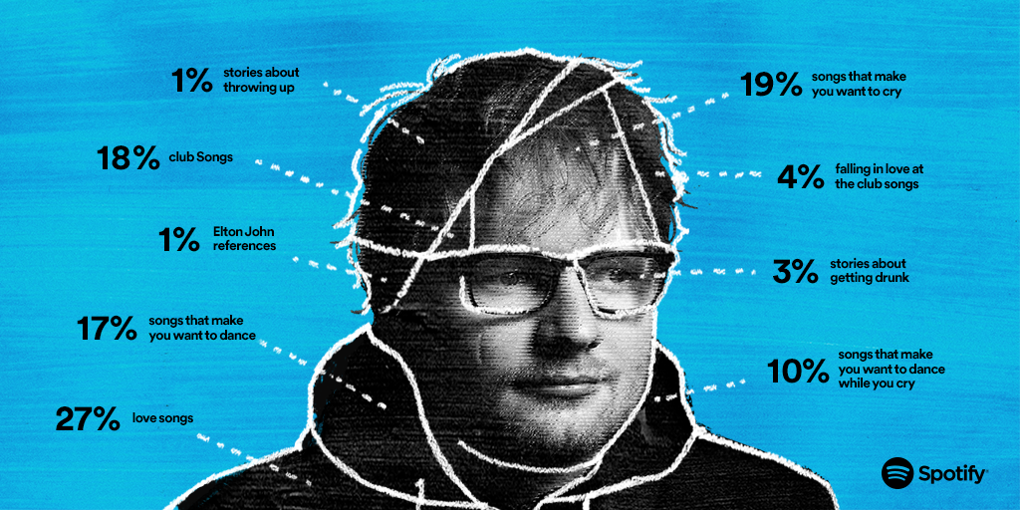 In an interview with Spotify, Sheeran explains:

“I’ve had the concept for ‘Divide’ since 2010. I wanted the whole album to feel a bit schizophrenic. My first sort of music that I got into that wasn’t from my parents was rap, metal, punk… I went one day listening to Iowa, Slipknot and the next day listening to Damian Rice’s ‘O’, It was quite a switch.”

So for those that can’t seem to listen to any song all the way through, this might just be your new favorite album.

Fan-favorite song “Galway Girl” gives us the ultimate wanderlust. How many trips to Ireland were booked after hearing this song? A lot, probably.

Slowing it down, Sheeran pours out his unprofessed love in the song “How Would You Feel”. Fun fact: Sheeran had the help of John Mayer’s guitar skills on this track, and it couldn’t be a more romantic combination.

Whether you’re about to hit the town on Friday night or you’re in the mood to look out your window and contemplate life – “Divide” has all the emotion, all the fun, and all the classic Ed Sheeran vibes we love.