With Special Guests 50 Cent, Fabolous, O.T. Genasis & Kap G
Saturday, May 13 at Golden 1 Center
Tickets On Sale 10am This Saturday At Ticketmaster.com

Sacramento, Calif. – Celebrating some of the biggest names in music today, Grammy Award-winning and multi-platinum-selling, singer-songwriter, Chris Brown, brings The Party Tour to cities across North America this summer with a stop at Golden 1 Center in Sacramento on Saturday, May 13.

Produced by Live Nation, The Party Tour features 50 Cent, Fabolous, O.T. Genasis, and Kap G for 33-nights of soul-baring performances, and an all-star set for a 2+ hour powerhouse show each night. Chris kicks off the party as his friends join him throughout the night - the party begins when the show begins!

Fans are urged to get there on time each night to be part of this historical movement! The anthem of the night was teased in Brown's current single "Party" ft. Gucci Mane, Usher. The Party Tour begins a seven-week run on Friday, March 31 in Baltimore, with stops in Boston, Detroit, New Orleans, Miami, Philadelphia, Brooklyn, Atlanta, Phoenix, Las Vegas and more, culminating on Tuesday, May 23 in Los Angeles. For more information visit livenation.com.

Chris Brown:
Celebrating ten years in the music business, Chris Brown arrived on the music scene in 2005 as a 16-year-old with his hit single "Run It!" from his eponymous debut album. Since then he's racked up 10 million album sales worldwide, six No. 1 singles (two on the Hot 100; four on Hot R&B/Hip-Hop Songs), 11 top 10 Hot 100 singles and 22 top 10 singles on Hot R&B/Hip-Hop Songs. Meanwhile, his total song sales stand at 69 million and he has over one billion views on VEVO. Adding the coveted Grammy Award to his collection for F.A.M.E., Brown is the recipient of over 40 awards, including Billboard Music Awards for Artist of the Year (2006) and Top R&B Artist (2012), four BET Awards for Best Male R&B Artist and MTV Video Music Awards for Best Male Video and Best Choreography for "Turn Up the Music" (2012). In 2014, Brown released his sixth studio album X, which featured the platinum-plus selling single "Loyal" featuring Lil Wayne and Tyga, and eventually earned Brown three Grammy nominations. In 2015, the success of many of his hits, including "Zero," "Liquor," and "Ayo," led Brown to be named the #5 Rhythmic Artist of The Year and the #6 Urban Artist Of The Year, according to Mediabase's year-end chart information. Brown, released his current single and video "Party" ft. Gucci Mane and Usher in December 2016. "Party" will be included on Brown's forthcoming eighth studio album, slated for release in 2017. http://www.chrisbrownworld.com/.

50 Cent:
50 Cent exploded on the music scene in 2003 and has been rewriting hip hop history ever since. Get Rich or Die Tryin', his debut album made history when it sold 872,000 copies, breaking the record for first week sales of any major label debut in the entire SoundScan era, remaining at #1 for six weeks and was certified platinum 9-times by the RIAA. To date, 50 Cent has sold more than 22 million albums worldwide and has received numerous awards includging 13 Grammy nominations throughout his career. The release of his third album, Curtis in September 2007 dominated the album charts selling over one million copies worldwide and garnered two Grammy nominations for Best Rap Song and Best Rap Solo Performance. In November 2009, 50 Cent released his fourth studio album, Before I Self Destruct which received wide critical acclaim. 50 Cent's fifth studio album, Animal Ambition features collaborations with Trey Songz, Yo Gotti, Jadakiss, Styles P and more.http://50cent.com/

gems and hit singles ("Make Me Better," "Into You," "Breathe") and a long list of collaborators, including Rihanna, Jennifer Lopez, Trey Songz, Ne-Yo, Chris Brown and Nicki Minaj. http://www.myfabolouslife.com/

O.T. Genasis:
O.T. Genasis hails from Atlanta, but his roots are firmly planted in Long Beach. His first official release, "CoCo" became a viral sensation accumulating over 200 million views on YouTube and is certified Platinum. Signed to Busta Ryhmes Conglomerate Entertainment, O.T. Genasis debut is one of the most anticipated forthcoming releases in hip hop today. http://www.otgenasis.com/

Kap G:
Kap G made his i am OTHER/Atlantic debut with last year's acclaimed "EL SOUTHSIDE" mixtape, hosted by DJ Drama. The project - which includes production from Pharrell Williams and guest spots from Young Thug, YFN Lucci, Nechie, and Ca$h Out - is highlighted by the breakout single, "Girlfriend" - the video has exceeded 13 million and the audio has received over 33 million streams worldwide. http://www.therealkapg.com/ 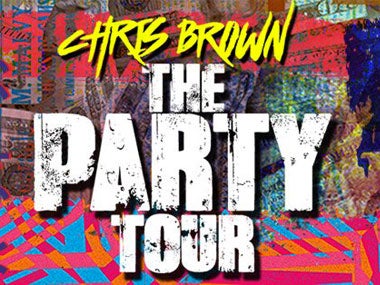 May 13 \ The Party Tour
Tickets