Sacramento, Calif. – The world famous Harlem Globetrotters, featuring some of the most electrifying athletes on the planet, will bring their spectacular show to the Golden 1 Center – for the first time ever – in Sacramento on Monday, Jan. 16 (Martin Luther King Day) at 1 p.m. and 6 p.m. during their 2017 World Tour.

Tickets start at $24.00 and will be available for purchase on Monday, August 8 at Ticketmaster.com, or by phone at 800-745-3000. Information on group and scout tickets can also be found at harlemglobetrotters.com.

The Harlem Globetrotters will tip off their 2017 World Tour on Dec. 26, 2016 and bring their unrivalled family entertainment to over 250 cities in 48 states across North America.

The Harlem Globetrotters® are legendary worldwide, synonymous with one-of-a-kind family entertainment and great basketball skills for the past 90 years. Throughout their history, the Original Harlem Globetrotters have showcased their iconic talents in 122 countries and territories on six continents, often breaking down cultural and societal barriers while providing fans with their first-ever basketball experience. Proud inductees of the Naismith Memorial Basketball Hall of Fame, the Globetrotters have entertained hundreds of millions of fans – among them popes, kings, queens, and presidents – over nine thrilling decades. Sponsored by World Vision, Greyhound Lines and Baden Sports, Harlem Globetrotters International, Inc. is a wholly-owned subsidiary of Herschend Enterprises, the largest family-owned themed entertainment company in the U.S. For the latest news and information about the Harlem Globetrotters, visit the Globetrotters' official Web site: www.harlemglobetrotters.com. and follow them on Twitter @Globies.

*Rosters will vary in each city and are subject to change.
^ Subject to availability. 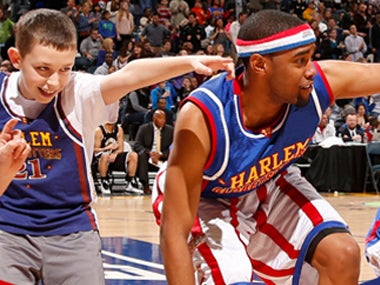