Paige VanZant is one of UFC’s brightest stars.  She also happens to be one of the sport’s hottest commodities.

With opportunities outside of the octagon, her star appeal has transcended mixed martial arts and she’s received plenty of offers to expand her brand to Hollywood.  But despite the allure of fame and celebrity beyond UFC, she remains committed to the fight game.

It's also something that tends to make some think VanZant isn't long for fighting. Since she appeared (and did very well) on "Dancing With the Stars" this year, VanZant says that question has followed her a lot.

"The biggest [question] I get is, 'Oh, did Hollywood steal you after 'Dancing With the Stars?'" VanZant said. "Nobody asked Antonio Brown or Von Miller if they were going back to the NFL [after being on DWTS].

"Maybe it's a stereotypical thing, because I'm a girl in something I don't necessarily belong in? I'll take it as a complement. I do belong in Hollywood, but I also belong in the UFC."

VanZant also shared some additional insights on her life in the piece, including a tidbit on her first professional fight.  She faces Michelle Waterson in the main event of UFC Fight Night this Saturday, Dec. 17 at Golden 1 Center. 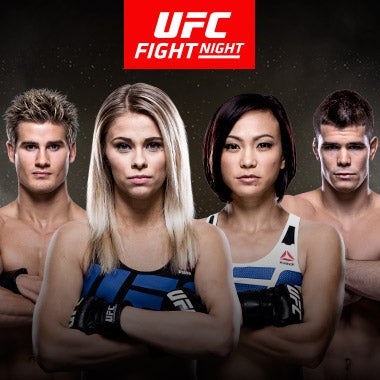