Today, Tyler, The Creator announces his Spring 2022 North American tour with Kali Uchis, Vince Staples and Teezo Touchdown. The announcement arrives on the heels of his critically acclaimed album CALL ME IF YOU GET LOST, which debuted at #1 on the Billboard 200 charts upon its release, as well as a trio of sold-out, underplay shows in Los Angeles, Dallas and New York City the week following the album's release, a show-stopping performance at this year's BET awards, and a headlining set at Lollapalooza 2021. Kicking off February 10, the tour will see Tyler play thirty-four arena shows, stopping in Sacramento on April 2. Tickets are on sale this Friday, August 6 at 10 a.m. via Golden1Center.com.

CALL ME IF YOU GET LOST is the follow-up to Tyler, The Creator's 2019 Grammy-winning album IGOR, which debuted at No. 1 on the Billboard Hot 200 chart, with 8 of the album's songs also charting on the Billboard Hot 100. IGOR was also recognized in Best Album of the Year lists by Billboard, Complex, GQ, Pitchfork, Rolling Stone and more and the same year Tyler was named Wall Street Journal Magazine’s Innovator of the Year and GQ Magazine’s Man of the Year. 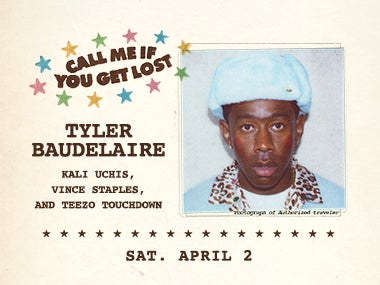 Apr 2 \ Call Me If You Get Lost
Tickets