This year’s CMA Awards took place on November 12th in Nashville, Tennessee with Golden 1 Center performers taking home a chunk of the hardware.

With the COVID-19 pandemic still affecting much of the nation, the CMA Awards were sure to be a little different this year but as the saying goes, the show must go on, and it did in the best way.

Luke Combs was a big winner with Album of the Year and Male Vocalist of the Year. He won for his sophomore album What You See Is What You Get and won male vocalist of the year for the second year in a row. That brings Combs’ collection of CMA Awards to five.

You could say the Entertainer of the Year award was a bit of a surprise.

Eric Church won that category on his fourth nomination for the award and this was his first CMA win in any category in four years.

While fans may have been surprised, we weren’t surprised at the heartfelt acceptance speech he delivered dealing with the state of the world:

"If ever there was a year not to win this award…This award this year, at least for me, has been about the loss of this year—the loss of life, loss of playing shows, loss of freedom, loss of kids being in schools. And you know what the win is—the win is we all were here tonight together as a country music, in person, live, not on Zoom. And I believe this—it’s going to be music that brings us out of this…"

Not to be shown up, Dan + Shay took home Vocal Duo of the Year for the second year in a row. Anyone who has seen them perform would know they were a shoo-in for the award.

Wrapping up the night for Golden 1 Center performers was Miranda Lambert, who took home the trophy for Music Video of the Year for her song, “Bluebird.”

This award was special, not just because she won but Miranda leads female artists in CMA Awards. Additionally, among all artists, she is now tied for fourth place with Garth Brooks and Brad Paisley.

We couldn’t have asked for a better show from the country capital of the world! Congratulations to all of the nominees and winners. We can’t wait to see what’s in store from all of these artists and more! 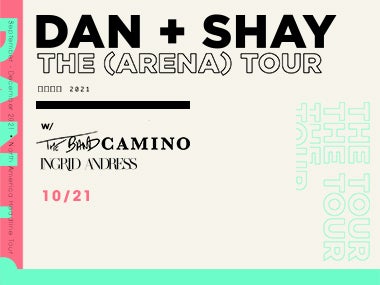