RADIO 94.7’s Electric Christmas Returns to Golden 1 Center, Featuring Performances by The Lumineers, Portugal. The Man, and WALK THE MOON

SACRAMENTO, CA – Today, RADIO 94.7 announced its fifth annual Electric Christmas, the second ever at Golden 1 Center, will be held on Thursday, December 7. This year’s announced performers include The Lumineers, Portugal. The Man, and WALK THE MOON.

Tickets will go on sale Friday, September 29 at 10 a.m. onGolden1Center.com.

The Lumineers: The Lumineers are Wesley Schultz (vocals, guitar), Jeremiah Fraites (drums, piano), and Neyla Pekarek (cellist, backing vocals). The independent American trio out of Denver took the world by storm in 2012 with their irresistible anthem “Ho Hey,” propelling them to spotlight. Their newest album, Cleopatra, featuring hits like “Angela,” “Cleopatra,” and “Ophelia,” is full of finely detailed and beautiful songs that will get under the listener's skin.

WALK THE MOON: American indie-rock band, WALK THE MOON, brings a flare of pop and dance rock to their music. Known for their breakout hit, “Shut Up and Dance,” which peaked at number 4 on the Billboard Hot 100, and equally popular song “Work This Body.” The band, featuring members Nicholas Petricca, Kevin Ray, Sean Waugaman, and Eli Maiman, will release their new album, What If Nothing, which will be available on November 10. 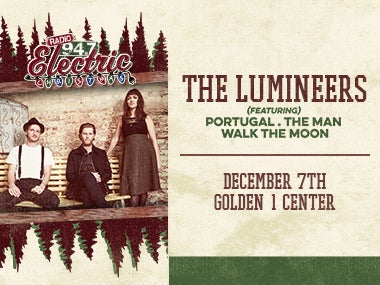