After a successful outing last week, Golden 1 Center will host its second D-League matchup with the Bighorns and Raptors 905 facing off Friday night. The Bighorns, the Kings D-League affiliate, are in the process of finding their groove and hoping to finish the final half of the season strong with their young talent.

The Raptors 905, affiliate of the Toronto Raptors, are currently on a seven-game win streak. The Raptors 905 are coming off a 102-97 victory over the Northern Arizona Suns and look to continue their progressive momentum. In their last matchup, 905 guard Will Sheehey led the night with 18 points in 21 minutes. Accompanied by the presence of center Yanick Moreira, who finished the night with a double-double (13 points and 10 rebounds), the 905 commanded three of the four quarters en route to victory.

In their previous matchup at Golden 1 Center last Friday, the Bighorns fell victim to a slow start in the first half. They found their momentum early after halftime however, with 31 points scored in the third and 41 in the fourth quarter, ultimately helping them to a 109-108 win over the Santa Cruz Warriors. Coming up short in their Wednesday matchup to the Windy City Bulls, the Bighorns will look to guard Kendall Marshall and center Geogios Papagiannis, who each finished with 23 and 19 points, to be leaders both off and on the court heading into this next spotlight game at Golden 1 Center.

The Bighorns look to bounce back tonight against the 905 in their home away from home.

Attention will be placed on the matchup of guards - Marshall vs Brady Heslip. Both have lead their teams as high scorers in numerous games throughout the season.

The D-League serves as the NBA’s research and development laboratory, not only in playing style, but for the rules of the game themselves. This past year, changes were made regarding coach’s challenges, goaltending, and timeouts. 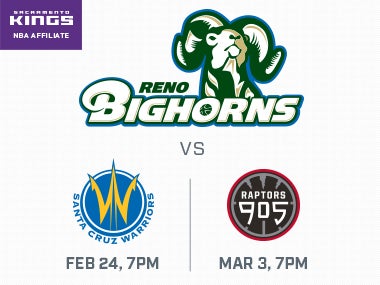