If there’s one thing we know about Lindsey Stirling, it’s that she oozes talent. Since becoming a quarter-finalist on America’s Got Talent back in 2010, she has continued to prove her incredible talent to the world. But before the hip-hop violinist, composer, and performing artist takes Sactown by storm in November, we’ve gathered some interesting facts you may not have known about the star.

1. Stirling first took an interest in the violin at just five years old. Though she also had a love for dancing, her parents were forced to make her choose between the two because of financial struggles. (Needless to say, she chose violin!)

2. Little did young Lindsey know, she would eventually get to fulfill her dream of getting professional dance lessons in a major way. She competed on Season 25 of Dancing with the Stars with partner Mark Ballas, and came in 2nd place! “That little girl that begged for violin lessons and dance lessons, this show has helped the two come together. That’s a dream come true,” she said in an interview following the finale.

3. There was a time in college when the musical prodigy almost gave up playing violin entirely due to personal struggles with anorexia and depression. “I pushed out everything that was important just so I could try to disappear,” Stirling remembered. Though she admittedly still struggles with depression, she attributes her strength and perseverance to her Mormon faith.

4. She has an emotional support dog! Her pet Chihuahua, “Luna Latte,” is with her wherever she goes. She rescued the pup in 2016 and included “Latte” in her name in honor of her best friend who passed away and always loved vanilla lattes. She told Fuse TV, “I swear this dog was sent to me by an angel. She’s the best little thing that ever happened to me.”

5. She majored in filmmaking at a private, non-profit research University in Provo, Utah by the name of Brigham Young University. Fellow famous BYU alumni include author Stephanie Meyer and actor John Heder.

6. When the music video for her song “Crystalize” was released in 2012, it became the eighth most-watched YouTube video of the year with 42 million views. Now, the video has exceeded 200 million views and her YouTube channel “LindseyTime” has a whopping 11 million subscribers and counting. She was even named Youtube's highest earning female star in 2016, making $6 million a year from her videos.

7. As if her resume wasn't impressive enough, Stirling can also add New York Times bestselling author to her long list of achievements. The Only Pirate at the Party is an autobiography detailing how events in her early life strongly influenced her successful career.

Don’t miss your chance for an experience of a lifetime when Lindsey Stirling brings The Wanderland Tour to Golden 1 Center on November 24! 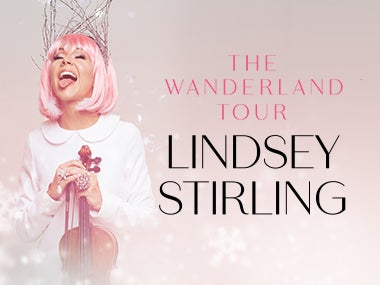