Today, the National Collegiate Athletic Association (NCAA) announced that Golden 1 Center will host the first- and second- round games of the 2023 NCAA Division I Men’s Basketball Championship tournament and the regional games of the 2026 NCAA Division I Women’s Basketball Championship tournament. Following the exciting news, Sacramento Kings Owner and Chairman Vivek Ranadivé issued the following statement:

“It is a tremendous honor to have Golden 1 Center selected once again to welcome student-athletes, coaches and staff for championship sports in 2023 and 2026. Sacramento, a city built on basketball, is home to the best fans in the NBA and will provide the perfect backdrop for collegiate competition at our world-class facility in the heart of Northern California.”

In spring 2017, within its first year of operation, Golden 1 Center opened its doors to the first NCAA tournament in Sacramento in ten years. The tournament was a huge success, bringing over 100,000 visitors to Downtown Sacramento on one day and nearly $6 million in economic impact for the surrounding region.

Golden 1 Center was also slated to host the first- and second-round games of the 2020 NCAA Division I Men’s Basketball Championship tournament, which was canceled due to the COVID-19 pandemic.

Fans can sign up here to be notified when tickets go on sale for the upcoming NCAA tournaments at Golden 1 Center.

-- More than 3,000 bids were submitted for preliminary rounds and finals of 86 championships --

For only the third time in its history, the NCAA undertook a site selection process where most of its championships were put out for bid at the same time.

The result: The Association made more than 450 selections of host sites for preliminary rounds and final sites of predetermined championships in Divisions I, II and III, with most to be held from 2022-23 through 2025-26.

The NCAA received more than 3,000 bid submissions from NCAA member schools, conferences, sports commissions and cities vying to host predetermined rounds for 86 of the NCAA’s 90 championships. The sites were selected by the respective NCAA sports committees and approved by the divisional competition oversight and championships committees.

Division I baseball, Division I softball and the championship game of the Football Championship Subdivision were omitted from the process due to existing contracts. In addition, Division III women’s ice hockey was not included, as predetermined sites are not selected.

“The response of our membership, host cities and local organizing committees to this process was tremendous,” said Joni Comstock, NCAA senior vice president of championships. “Thanks to their commitment, we are excited that our student-athletes will play in some of the top locations and venues in the United States.”

Forty-three states plus the District of Columbia were selected to host at least one NCAA championship event, with California garnering the most, with 34. Texas was second with 30, while North Carolina totaled 28, followed by Pennsylvania with 27 and Ohio with 25.

This was the first time the site selection process has been held since the NCAA changed its policy preventing states with legal wagering based on single-game betting from hosting its championships. Therefore, the state of Nevada will host a predetermined NCAA championship for the first time since 1991, when the Thomas and Mack Center on the campus of UNLV hosted a Division I Women’s Basketball Regional. The Silver State will host 11 events, including a 2023 Division I Men’s Basketball Regional and the 2026 Men’s Frozen Four.

“While the NCAA seeks federal legislation to better regulate sports wagering, particularly to safeguard college sports competitions, we are excited to bring our national championships to Las Vegas,” said Dan Gavitt, the NCAA’s senior vice president of basketball. “The city has hosted numerous championships sponsored by our member conferences, and the experience of the teams and fans has been overwhelmingly positive. We anticipate that being the case for our championships as well.”

Tampa Bay has welcomed more fans in Women’s Final Four history than any other city, with a combined 123,039 fans attending in 2008, 2015 and 2019. In 2019, sellout crowds in Amalie Arena totaled 40,189 fans as the Baylor Lady Bears claimed the national championship. The University of South Florida and the Tampa Bay Sports Commission will serve as co-hosts, with games played April 4 and 6, 2025.

The state of Arizona will play host to the Women’s Final Four for the first time when Phoenix hosts in 2026. The event was last held in the Mountain and Pacific time zones in 2012 in Denver and 1999 in San Jose, California. Games at Talking Stick Resort Arena will be played over Easter weekend, with the national semifinals April 3 and the national championship decided April 5, 2026. Arizona State will serve as the host school.

“This bid cycle was significant for Division I women’s basketball, as we were able to identify two outstanding future host cities for the Women’s Final Four in 2025 and 2026 and named the eight regional host sites that will be part of our new two-site regional format that is in play beginning in 2023,” said Lynn Holzman, NCAA vice president of women’s basketball. “I am pleased that over the next six years we will play in several new markets, while providing enhanced hosting opportunities.”

Another notable highlight of the bid selection process has the USTA National Campus in Orlando, Florida, with its 100-court facility, serving as the venue for all six tennis championships in 2023. It will mark the first time in NCAA history that men’s and women’s championships in all three divisions of the same sport are held at the same time in the same venue.

In Division III, the Stagg Bowl, Division III’s football championship game, will be hosted in 2022 at Navy-Marine Corps Stadium on the campus of the U.S. Naval Academy in Annapolis, Maryland, for the first time in history. Then, in 2023, the Stagg Bowl will return to Salem Stadium in Salem, Virginia, for the first time since 2017, the last of 25 straight championship games played in that venue.

The NCAA sports committees made the nearly 450 selections of host sites based on criteria that included the ability to create an outstanding experience for student-athletes, along with adherence to NCAA sport-specific bid specifications.

Specifications can include, but are not limited to, providing optimal facilities; ease of travel to the location and ample lodging; and adherence to NCAA principles, which include providing an atmosphere that is safe and respects the dignity of all attendees.

Other highlights of the championship sites include:

Kansas City, Missouri, has hosted more NCAA men’s basketball tournament games than any other city, with 134. That total will increase, as the T-Mobile Center will host a 2023 Division I men’s basketball regional.

Division I women’s basketball is undergoing a format change and identified eight host cities that will serve as hosts for the regional rounds from 2023 to 2026. Beginning in 2023, regional play will be held at two sites per year, with eight teams competing at each site.

The National Collegiate Beach Volleyball Championship will continue to be held at Gulf Beach Place in Gulf Shores, Alabama, in 2023 and 2024 before moving locations for the first time. In 2025 and 2026, the Huntington Beach Pier in Huntington Beach, California, will be the championship location.

In 2025, the Division I Wrestling Championships are headed to Philadelphia for the second time. The previous time was in 2011, when the City of Brotherly Love became the first host site to surpass 100,000 for total attendance, setting a then-record of 104,260. 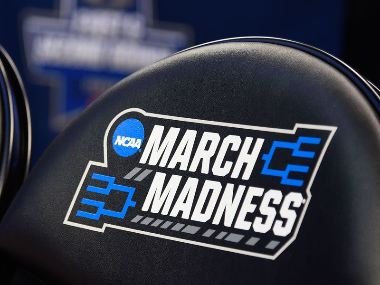