Believe it or not, before becoming a household name, Cirque Du Soleil started out as a small group of street performers in Quebec City, Canada in the early 1980s. The ambitious entertainers would breathe fire, juggle on stilts, and play music for small crowds, wowing them with their unique talents.

Now over 30 years later, the company has grown to consist of over 5,000 employees, has various shows running on 6 out of 7 continents, and has become one of the most well-known and successful entertainment companies in the world.

In its latest creation, Cirque Du Soleil's "Crystal", the company has soared to new heights with its first-ever show to incorporate ice skating and acrobatics! Here are 10 fun facts you need to know before "Crystal" glides into Golden 1 Center on March 27.

3. One of the ice skaters in the show is four-time World-champion and Canadian National champion, Kurt Browning!

4. The ice skating rink on which the entertainers will perform is an NHL-sized rink!

5. Made up of a staff of over 500 artisans, the Cirque Du Soleil Costume Shop located in Montreal, Canada at the company's HQ, is responsible for custom-making every single costume for "Crystal" (and all of the Cirque shows!)

6. Every Cirque entertainer is trained to do his or her own performance makeup. Performers in "Crystal" have said that it can take them anywhere from 30 minutes to an hour to complete their makeup before each show.

7. "Crystal" is the first of any Cirque show to incorporate pop music in its soundtrack!

8. Gear for the show travels from city to city in 17 semi trucks and takes the crew around 19 hours to load-in and 4 hours to load out each time.

9. Every performer in the show had to learn how to ice skate well, as each one appears on skates at one point or another throughout the show.

10. Perhaps one of the most interesting pieces of information about "Crystal" is the story on which it centers. It's about a girl named Crystal who falls through the ice one day and enters a magical parallel universe. Here she meets a reflection of herself, and is forced to tackle important issues about self-reflection and identity.

Needless to say, this groundbreaking show is bound to be unforgettable. Grab your tickets to Cirque Du Soleil "Crystal" below! 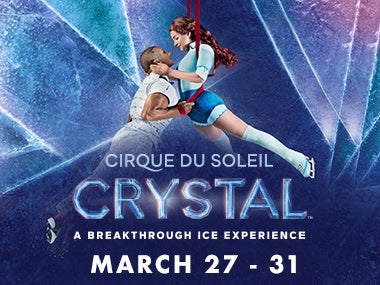