Sacramento, Calif.— Feld Entertainment® announced today that tickets for AMSOIL Arenacross, the most intense motocross racing on the planet, are now on sale for all racing events. AMSOIL Arenacross events are affordably priced for the whole family with seats starting at only $10.

AMSOIL Arenacross is one of the most extreme racing environments in the world with unparalleled levels of competition and a fully engaging environment for fans. These fearless and highly talented athletes will compete on man-made dirt battlegrounds built inside the country’s most well-known arenas for 19 nights of high-speed, high flying fierce racing competition.

The 2017 AMSOIL Arenacross season will consist of a 14-round battle for the coveted Ricky Carmichael Cup. The championship will travel across 13 different states including new stops at Portland, Oregon’s Moda Center on March 18, and Sacramento California’s Golden 1 Center on April 1.

The 2016 season showcased a battle for the title between a trio of teammates that went down to the final lap of the last Main Event in Las Vegas. In the end, AMSOIL Arenacross welcomed Gavin Faith as the 2016 champion and the first recipient of the Ricky Carmichael Cup. As he seeks to defend his title, Faith will have an exceptional challenge ahead of him as he chases back-to-back championships against elite contenders like Chris Blose, Jacob Hayes, Travis Sewell, and more riders set to topple Faith.

Don't miss your chance to be a part of AMSOIL Arenacross's best-kept secret, the Monster Energy Fueled Track Party!  This is your exclusive opportunity to feel what AMSOIL Arenacross and “Motocross, More Intense™" is all about by putting your feet on the same dirt battleground where the sport's fearless athletes will lay it all on the line. Get an up-close look at the riders, machines and obstacles used to soar through the air at unimaginable heights and speeds. Join the Monster Girls and ACM-nominated DJ KO as they pump up the pre-race adrenaline, while you compete in contests, win swag and get the night started in the most exciting way possible. The party starts Saturday night at 5:00 PM and costs $10 at the gate. Or get FREE access by simply recycling an empty can of Monster Energy.

For more information on AMSOIL Arenacross, please log on to www.Arenacross.com or follow us via our social channels below:

About the American Motorcyclist Association
Founded in 1924, the AMA is a not-for-profit member-based association whose mission is to promote the motorcycle lifestyle and protect the future of motorcycling. As the world's largest motorcycling rights and event sanctioning organization, the AMA advocates for riders' interests at all levels of government and sanctions thousands of competition and recreational events every year. The AMA also provides money-saving discounts on products and services for its members. Through the AMA Motorcycle Hall of Fame in Pickerington, Ohio, the AMA honors the heroes and heritage of motorcycling. For more information, visit www.americanmotorcyclist.com. 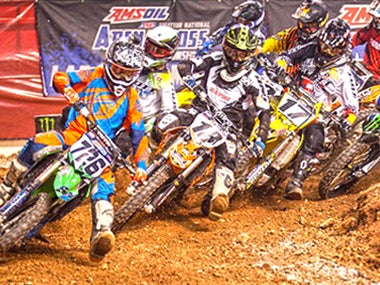